‘The Gentlest, Bravest and Most Just of Men’ 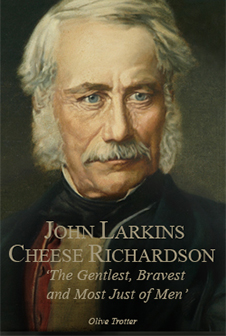 The definitive biography of a much-beloved and respected colonial activist. Born in Bengal in 1810 but educated in England, Richardson spent his early career in India in the military, achieving the rank of major. He served in the Afghanistan campaign in 1842 and was ADC to Sir Harry Smith throughout the Sikh Wars. On his retirement from the army in the 1850s he spent four months in New Zealand and subsequently decided to migrate permanently, settling in Otago in 1856.

'The old Major', as he was known, soon became politically active, first being elected to the Otago Provincial Council serving as its Superintendent during the goldrush years, then becoming an MP and, in 1868, Speaker of the Legislative Council. He was the father of a family that included two bright daughters and it was largely his advocacy that ensured the University of Otago should open its doors to women – becoming the first university in the Southern Hemisphere to admit women to all its classes.

A witty, cultivated man much in demand as a public speaker, Richardson was progressive on Maori land issues and in the 1870s was commissioner enquiring into British and Māori accounts of the wars. Māori, he protested, 'to this day has been treated as a thing of naught'. Legislation and other measures that he promoted, including attempts to control the rabbit nuisance already threatening pastoral farming, revealed a far-seeing mind. Richardson was intelligent, warm and conscientious, and his death in 1878 evoked great public mourning.

OLIVE TROTTER is a Dunedin writer who discovered Richardson while she was researching the life of Miss Learmonth Dalrymple, a tireless 19th-century campaigner for women's rights. Since he amassed a vast archive in the course of his life – he kept every letter he had ever received, a complete record of his career in India, including pay-slips and commission documents, diaries from his early life in New Zealand, copies of his lectures on British India, and so on – she soon found herself with the task of sorting the largely unsorted Richardson papers at the Otago Settlers Museum, a task which led to this book. The manuscript of this, her first book, was completed in 1992. Subsequently Olive Trotter self-published four other books: The Maidservants Scandal, Dunedin's Crowning Glory: The Town Clock Tower, Pioneers Behind Bars, and Dunedin's Spiteful Socrates: J.G.S. Grant.