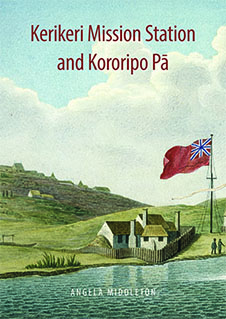 A concise guide to the Kerikeri mission from its inception in 1819 until 1845, when it became a secular settlement and the Stone Store was sold to private owners. It includes a discussion of missionaries and Māori who were involved with the mission, including people such as Hongi Hika, Rewa and Moka.

The book is richly illustrated with photographs from the Kemp House and Stone Store collections of artefacts and objects, once in daily use. It contains a discussion and illustrations of the store accounts, revealing details of daily life at the mission – what food, clothing, tools and other goods were available, where they came from and who they were distributed to.

ANGELA MIDDLETON is a consultant archaeologist and an honorary research fellow in the Department of Anthropology and Archaeology at the University of Otago. Her work in southern and northern New Zealand has focused on the early engagement between Māori and Pakehā and an understanding of early Pakehā settlement.