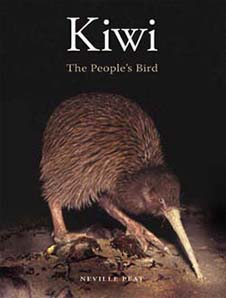 Back in 1990, when Neville Peat wrote The Incredible Kiwi, the national bird was in retreat from habitat loss and the severe impact of predation. It was not well understood, being nocturnal and hidden in the forest. Most Kiwis had never seen their national bird.

During the 1990s, saving the kiwi became a popular cause. Community kiwi conservation projects have emerged all over the country, especially in the North Island. And scientific research has led to greater knowledge of the bird's population dynamics and distribution. The kiwi has truly become 'the people's bird'.

In this book, the author describes the kiwi from every point of view, from wild bird to national emblem. What is this biological oddity called the kiwi? Exactly how many species of kiwi are there? Where do they live? What do they eat? How are people helping them to survive? Why does this bird have such a major place in the Kiwi nation's life?

And he tells the story of the largest popular movement in support of an endangered native species that New Zealand has ever seen.

NEVILLE PEAT is a leading natural history writer, whose prize-winning works include four regional natural history books (co-authored with Brian Patrick) and most recently Shackleton's Whisky (Random House, 2012). He received the prestigious Creative New Zealand Michael King Writers’ Fellowship in 2007 and has been a Dunedin City Councillor since 2013.

'... the recovery of the kiwi is ... inspiring. The game is long and hard and it hasn't yet been won, but we are all in the team and there is good reason for hope.' – Wairarapa Times

'Peat ... comes away feeling cautiously optimistic about the future of New Zealand's national bird, thanks to an upsurge in community support and participation in local projects. The book covers all aspects of kiwi life, including an update on population genetics' – Dominion Post