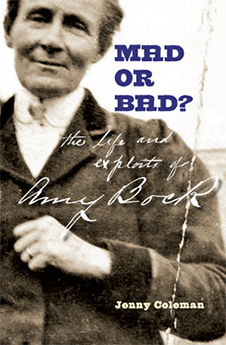 Amy Bock's life has been the inspiration for plays, books, a TV programme, music, poems, an exhibition and more, but Mad or Bad? is the first comprehensive biography. And while Amy gained notoriety as a daring, duplicitous and talked-about con artist who impersonated a man and married an unsuspecting woman, in this book the author shows how her story was not a straightforward case of fraud and misrepresentation.

Born in Hobart, Tasmania, Amy had a convict heritage on both sides of her family. While she gained notoriety in 1909 for her impersonation of a man and marriage with an unsuspecting woman, the author shows how her whole life was one of fraud and misrepresentation. After teaching for six years in Victorian schools until she was asked to resign, Amy migrated to New Zealand in 1884. Assuming a variety of personae and remaining conveniently itinerant, she pursued a consistent course of petty crime for the next 25 years. In presenting her colourful and chequered life, this biography leaves the reader to judge whether she was essentially mad or just bad.

'This attempt to unravel the facts of Bock's life and long criminal career depicts her as a more complex character than the legend suggests: a talented actor and lively company, driven not by simple greed but by a compulsion to play a part.' – Canvas Magazine, Weekend Herald; 7 August 2010.

'It is well written and informative. While the topic may catch the attention of sensation seekers, the contents aim to provide social context and bring the reader to a better, even compassionate, understanding of Amy Bock's character.' – The Press, 14 August 2010

'Read the book and find out how secrets, lies, fabrications, media accounts and selective disclosure complicate our picture of this fascinating women.' – Craig Young, gaynz.com, 20 August 2010

'Coleman's achievement is greater [than that of Amy Bock's]: to make sense of a life that has a demonstrable grounding in reality, when most of what we’ve heard about it has been legend, not history' – NZ Listener, 28 August 2010

'Jenny Coleman has done a fine job in researching Amy's life ... This surely will be the definitive biography of Amy to be read in future years ... fascinating biography of a strange women' – Otago Daily Times, 17 July 2010.

'... the most comprehensive biography yet of Amy Bock, who will forever be remembered ...' – North and South Magazine, August 2010