Ministers and Members
in the New Zealand Parliament 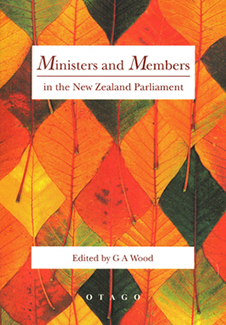 An essential reference for voters or anyone working in politics, journalism, research or education, this book records all the ministers and members of the New Zealand Parliament since 1911. The first section lists ministers, their dates of office and ministerial responsibilities. In the second there is an alphabetical listing of names, dates of service, party affiliation, electorate and whether a minister. MPs currently in office are listed in bold type. Appendices include information such as general elections, by-elections and parliamentary sessions, referenda, women MPs and ministers, independents and third party MPs and MPs' honoraria, salaries and allowances, and leaders of major political parties.

Associate Professor G.A. WOOD works in the Department of Political Studies at the University of Otago. Author of Governing New Zealand, he has written extensively on New Zealand politics and history.