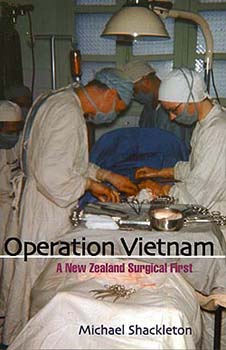 New Zealand has a long and honourable record of sending health service personnel to trouble spots around the world. Michael Shackleton was an energetic and determined pioneer. In 1963 he established and led a New Zealand surgical team in Qui Nhon, Vietnam. Until East Timor, this was New Zealand's biggest ever overseas medical operation and was sustained until 1975.

His wife Annabel and five young children went along on this adventure. Setting out with little knowledge of the country they were to spend a year in, the couple were told before their arrival that Vietnam had reasonably sophisticated living conditions. This was before the direct American involvement in the Vietnam War and after the French departure from Vietnam. Instead they found disorganisation and an accommodation nightmare. Operation Vietnam: A New Zealand Surgical First is Michael Shackleton's memoir of the events, with extracts from Annabel Shackleton's letters home recount the domestic side of the experience.

The surgical team cared for civilians, working with the Binh Dinh Province hospital, which was overcrowded, dirty and almost completely lacking equipment and bedding. The experiences Shackleton describes of establishing the unit in this setting highlight problems of committing teams to conflicts and then the difficulties of providing well-planned and adequate support. These problems were often fuelled by unsatisfactory dealings with New Zealand bureaucracy.

Added to this, Vietnam was experiencing political and social upheaval. Viet Cong were operating just 15 kilometres from Qui Nhon and in August 1963 martial law was declared throughout Vietnam. Shackleton was in Saigon at the time of the November coup against the Diem regime: from the rooftop of his hotel he witnessed the attack on Diem's stronghold. President Kennedy was assassinated three weeks later, with subsequent impact on the United States military in Vietnam, with whom the New Zealand team frequently dealt.

The New Zealand surgical unit was set up at the suggestion of the United States under the auspices of the Colombo Plan, which aimed to prevent the growth of communism by improving the living conditions of underdeveloped countries. Establishing the surgical team was one of the most ambitious aid projects undertaken by this country up to that time and was done before New Zealand's military involvement in Vietnam. The unit Shackleton established continued to operate until the very last days of the war, in 1975, providing health care for the civilian sick and war wounded long after most similar units had closed down.