The story of a New Zealand family 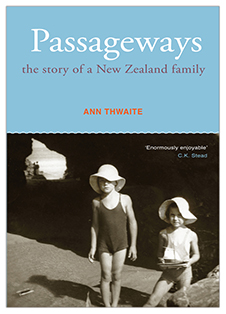 The author’s eight great-grandparents all arrived in New Zealand between 1858 and 1868. Their family names were Harrop, Sales, Campbell, Brown, Valentine, Maxwell, Jefcoate and Oliver. She looks at their reasons for migration, how they fared once settled, and at their participation in gold-digging, farming, road-making, school-teaching and surveying. Both of her parents were graduates of Canterbury University and A.J. Harrop was a respected New Zealand historian.

Ann explains how she and her brother David came to be born in England and how, early in World War II, they were taken to their New Zealand relations for safety, returning to the UK five years later with a deep love for the country where David later became a farmer. This is an engaging portrait of a brilliant and unconventional New Zealand–British family.

ANN THWAITE was born in London, the daughter of two New Zealanders. She was at school in Tirau and Wellington during the war, returning to England to complete her education at Queen Elizabeth’s, Barnet and St Hilda’s College, Oxford. She has lived in Tokyo, Benghazi and Nashville, Tennessee and has lectured in many countries. She won the Whitbread Prize for the best biography of 1990 (A.A. Milne: His life), is an Oxford D.Litt and a Fellow of the Royal Society of Literature. She is now settled in Norfolk, England, with her husband, the poet Anthony Thwaite. They have four daughters and ten grandchildren.

'An incredible achievement, and there are tales in here to which we will all respond, both triumphs and tragedies. Congratulations to the writer on her vivid reconstruction, and to Otago University Press for publishing such an important documentary.' – Bravado Magazine, accessed May 24 2010

‘… a candid, fascinating family and social history book spanning generations in both New Zealand and the UK. It’s hard to believe that Ann knew very little about her family history before embarking on assembling the jigsaw puzzle into a very enjoyable story.’ – Heritage Matters, Winter 2009

'The author of five major biographies, Thwaite's works tend to take several years to complete. Subjects have been children's author A.A. Milne, Edmund Gosse, his father Philip Henry Gosse, Frances Hodgson Burnett and Emily Tennyson. This time, the subject matter is closer to home ... In Passageways Thwaite's own family secrets have been uncovered.' The Timaru Herald, 2 May 2009