Artists inside the museum 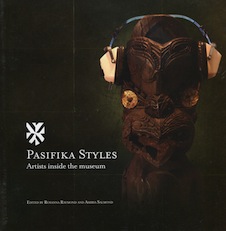 Pasifika Styles is about a groundbreaking experiment in the display of contemporary Pacific art. The artists flung open the stores of the museum and installed their works in cases next to taonga collected on the voyages of Cook and Vancouver. This heralds a new era of collaborative curatorship in ethnographic museums.

For two years, visiting artists (including Ani O’Neill, Maureen Lander, Shigeyuki Kihara, Tracey Tawhiao, Reuben Paterson, Rachel Rakena, Lisa Reihana, Lisa Taouma, Michel Tuffery) brought vitality to the collections by offering workshops, seminars, public activities and a festival of performing arts. This book describes the making of Pasifika Styles from the perspectives of the artists and the museum professionals and scholars involved, placing it in the midst of current debates about museums, cultural property and art.

‘There’s a wealth of colourful, stimulating and often funny (I think) illustrations, like Tane Raises His Eyebrows and the Do-It-Yourself Repatriation Kit, and gentle fun is poked at some of the qualms of the “high art” sector while preconceptions about “thieving bastards” are just as gently discarded. This learned publication will serve as a guidebook for future collaborations within our own communities as well as over the water.’ – Wairarapa Times-Age, November 2008

ROSANNA RAYMOND is an artist, performer and freelance curator who helped to establish the Pasifika Festival in Auckland. Now based in London, she has created exhibitions at a variety of UK venues and undertaken residencies in Britain, the US and France.

AMIRIA SALMOND is a curator and lecturer at the University of Cambridge. She has produced exhibitions at the Tairawhiti Museum in New Zealand, and studies and practises Maori weaving. Her book Museums, Anthropology and Imperial Exchange has been published by Cambridge University Press and a co-edited volume, Thinking Through Things: Theorising artefacts ethnographically, has recently been published by Routledge.