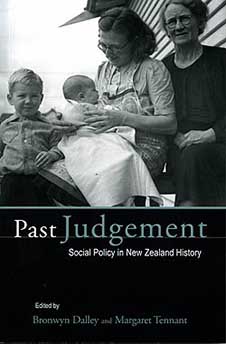 Appreciating New Zealand's distinctive social policy history is important in formulating future social policies. This is one of the premises in Past Judgement: Social Policy in New Zealand History, which brings together recent research on a range of social policy contexts.

Editors Bronwyn Dalley and Margaret Tennant have been struck by how New Zealand society leaps to judgements about once ideal, but now discredited, practices and policies. They hope this collection will illustrate the complexities behind the decisions constantly made about people and welfare.

They argue that past practice cannot be judged by present ideals. Time and context need to be taken into account, including an awareness of contemporary difficulties in dealing with social needs. Chapters on child abuse, family policy and Maori issues suggest that past policies and social work interventions may actually have been more flexible, humane and culturally sensitive than recent critiques have acknowledged.

In their essays, contributors emphasise both change and continuity in social policy. Many have delved into historical materials, only to find echoes in contemporary debates. Margaret Tennant's early research into charitable aid brought her up against nineteenth century denunciations of 'loafers' and 'brazen-faced beggars' which periodically resurface in concerns about welfare abuse. Bronwyn Dalley's study of twentieth-century child welfare revealed a long history of attempts by the state to work through family issues.

Many of the chapters go beyond the formulation of policies to examine, through case studies, their actual delivery. Margaret Tennant explores welfare history, government and the voluntary sector. Michael Belgrave looks at the welfare state, Peter Lineham religion and social policy, and Derek Dow examines Maori health research. Other chapters are more focused on time or issues: Gaynor Whyte on old-age pensions; Margaret McClure on social security, Linda Bryder on Plunket. The collection particularly draws attention to the period after the Second World War, a previously under-researched era for social policy.

The contributors to Past Judgement: Social Policy in New Zealand History have various experiences in social policy. Some have been policy-makers, others have contributed to social services as paid workers and volunteers. Some have benefited from those services. As historians they illustrate the complex dynamic behind past policy decisions and their longer-term implementation.

MARGARET TENNANT is Professor of History at Massey University. She is the author of Paupers and Providers: Charitable Aid in New Zealand (1989).