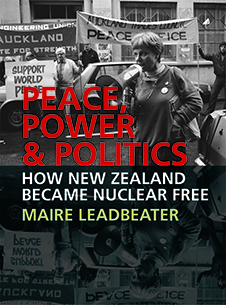 This is a story of how ordinary people created a movement that changed New Zealand's foreign policy and our identity as a nation.

The story of peace activism from our pre-recorded history to 1975 was told in Peace People: A history of peace activities in New Zealand (1992) by Elsie Locke. In this new book her daughter Maire Leadbeater takes the story up to the 1990s in an account of the dramatic stories of the colourful and courageous activist campaigns that led the New Zealand government to enact nuclear-free legislation in 1987. Politicians took the credit, but they were responding to a powerful groundswell of public opinion.

In this country nuclear disarmament has become part of our communal psyche to a greater extent than in any other western-aligned nation, but when politicians choose pragmatism over principle in foreign policy, peace and justice suffer. Peace activism is an ongoing story.

As spokesperson for Auckland CND in the 1980s MAIRE LEADBEATER played a leading role in the mass movement that successfully advocated for a nuclear-free New Zealand. She is the author of Negligent Neighbour: New Zealand's complicity in the invasion and occupation of Timor Leste (2006) and holds an Amnesty International New Zealand lifetime award for her work in human rights.