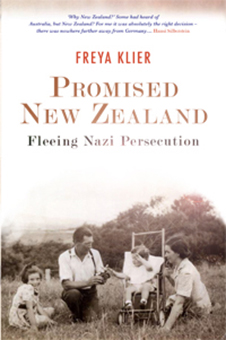 Promised New Zealand is the true tale of refugees who fled Nazi terror in Europe for a safe haven on the opposite side of the world – New Zealand.

The narrative skilfully interweaves the lives of 24 Jewish exiles: the Viennese philosopher, Karl Popper, is saved by travelling across the oceans to New Zealand, and German author Karl Wolfskehl likewise. The journey brings others to this land from very diverse places, even from Dr Mengele’s experiment rooms in Auschwitz. Klier depicts the plight of these immigrants, whose stories could scarcely be more varied. Yet they have one common link: they all flee to New Zealand, the one place furthest from Germany, their promised land at the end of the earth.

This book is a significant piece of world history, featuring vital stories that need to be told before they are lost to subsequent generations. It is the first English-language translation of this important work and the first time it has been published outside of Germany.

Born in 1950 in Dresden, Germany, FREYA KLIER went into a children’s home at the age of three after her father’s arrest. In 1968 when her attempt to flee East Germany failed, she was sentenced to 16 months imprisonment. After an early release, she became a co-founder of the GDR peace movement in 1980 and was subsequently banned from practising her profession. In 1988 she was arrested along with other civil rights activists and stripped of her citizenship. She lives today in Berlin as an author and film director. She has written Die Kaninchen von Ravensbrück: Medizinsche Experimente in der NS Zeit / The Guineapigs of Ravensbrück: Medical Experiments on Jewish women in the Nazi era (1994) among other books on wartime Germany.

'Klier is indebted to these survivors for their courage in telling what are unbelievably painful and complicated stories. She weaves them together well ... It is, then, not so much a collection of personal histories as a book of important recent history, personalised' – NZ Listener, 13 March 2010

'The author, who is a film director and civil rights and peace activist, and has written several books on wartime Germany, writes with clarity and directness. History comes alive in this must-read book.' – Your Weekend, Jan 23 2010.

'Freya Klier casts her net wide in detailing the poignant stories of 24 European Jews who, after many varying travails in the horrific pre-war period of Nazi Germany, eventually found sanctuary in New Zealand ... Klier backgrounds those pre-war Teutonic horrors and their effect on the book's main protagonists with skill.' – Otago Daily Times, 23 January, 2010.

'The author traces the journeys of the refugees and skilfully weaves together their personal stories as they unfold on both sides of the world – stories of incomprehensible horror, hatred and suspicions. They touch the core of one’s emotions, are hard to comprehend in our time, but must not be forgotten' – Heritage Matters, Issue 22, Autumn 2010

'Freya Klier has done these people a major service by tracing their story from Europe to NZ ... Not being German or Jewish, I picked up this book wondering whether it would have any relevance so many years later. It turned out to be a book that is impossible to read objectively. Here is human tragedy and the will to survive written on a huge scale by tracing the lives of a few.' – Nelson Mail; Accessed 13/2/2010

Praise for the German original, Gelobtes Neuseeland:
'The insanity of the twentieth century is palpable' – Mut Journal
'It was time someone sat down and wrote this book – very readable' – GeoWis.de
'A work whose impact lingers - exciting and moving' –Süddeutsche Zeitung