Protecting New Zealand at the Border 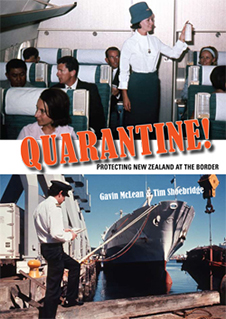 Every day, all over the world, quarantine officials screen international passengers and cargo and every week a border protection story is in the news. As a group of islands for which biosecurity is vital, New Zealand provides an ideal focus for this book, the world's first national history of quarantine. Colonial border control was ad hoc and reactive, initially focusing more on human disease than plants and animals, although sheep scab was held at bay. From the early 1890s, the new Agriculture Department's fruit inspectors took on codlin moth, fruit fly and other nasties, building fumigation sheds and trying to educate importers. Aircraft dramatically increased the biosecurity threat, and fear of malarial mosquitoes and fruit fly forced the country to rewrite its rulebooks in the 1950s. As trade diversified, new sea routes posed new biological threats and at last the government began inspecting imported timber. More recently, MAF Biosecurity NZ has been exercised defending the country against such headline-makers as varroa mite, didymo, Mediterranean fruit fly, and the painted apple moth. The result? Although there have been some costly incursions, New Zealand remains free from many dangerous diseases and agricultural and environmental threats. How this was achieved makes an exciting story.