A History of the Government Superannuation Fund 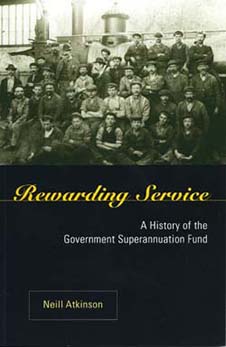 Remember the days when working for the public service was for life, with the reward of superannuation at the end? Things have changed in recent years and 'super' has become one of New Zealand's most contentious social and political issues. This book traces the controversial and often colourful history of public service superannuation. Rewarding Service: A History of the Government Superannuation Fund, by Neill Atkinson, is published by the University of Otago Press in association with the Ministry of Culture and Heritage.

The book is arranged chronologically in five periods, beginning with the development of superannuation (1856–1947). It began in colonial times when it was seen as a way of rewarding government employees for their service, of guarding against corruption, and of enabling 'the State to rid itself of elderly, infirm or unwanted staff without imposing undue hardship'.

The modern Government Superannuation Fund dates from 1948, when several separate public schemes were brought together to create a single institution. The closing chapters of the book discuss the changing political climate of the 1980s and 90s and subsequent policy and institutional reform.

Rewarding Service offers insights into the changing trends and attitudes towards pensions and social welfare schemes in the wider sense. Neill Atkinson writes in a clear and readable style, which is enhanced by the inclusion of graphs and historical photographs.

Rewarding Service is the most comprehensive book available on the history of state sector superannuation in New Zealand. It will be of interest to public servants and members of the Government, historians, economists, and those working in public policy and social welfare.

NEILL ATKINSON is a professional historian with a particular interest in labour, political, maritime and social history. He completed an MA in history at the University of Auckland, and now lives in Wellington, where he has worked for the Dictionary of New Zealand Biography as a researcher and editor, and as a contract historian for the History Group, Ministry for Culture and Heritage.

He is the author of Crew Culture: New Zealand Seafarers Under Sail and Steam (Te Papa Press, 2001), and has also written 14 biographies for the DNZB and several articles on labour history.