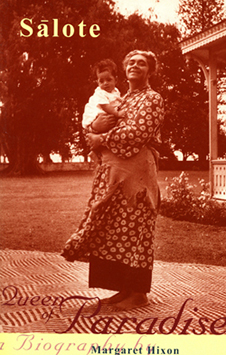 Queen Sālote ascended the throne of Tonga in 1918, at the age of 18, to lead this Pacific nation through the hazards of the 20th century until her death in 1965. An outstanding figure of her time, she was dubbed 'Queen of Paradise' by the British press during her visit to London for the coronation of Queen Elizabeth II.

With her husband Tungi, who died in 1942, Sālote worked hard to establish Tonga as a debt-free nation, with modern education, health and agriculture systems. At the same time, she encouraged the continuation of traditional arts, culture and values. When she died, she was much loved by the people. The fifteen thousand yards of black fabric imported into the country for use in mourning her did not meet the demand.

This biography paints an intimate portrait of Sālote, from her childhood through her education and her years as queen, drawing on oral histories, personal papers and newspaper accounts. It includes black-and-white historical and personal photographs.

MARGARET HIXON has produced a number of works documenting life in traditional communities. She first visited Tonga in 1987 and began researching this biography soon after. She was encouraged to write this book by the Tongan royal family.

'... essential reading for anyone wishing to understand the history of Tonga in the 20th century.' – Wendy Cowling, Waikato Times