The story of L.E. Richdale, the Royal Albatross
and the Yellow-eyed Penguin 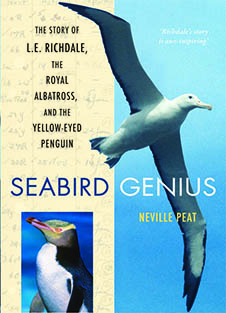 The first biography of Lance Richdale, who achieved international fame as the father of Otago's albatross colony from 1936 and for his research on the behaviour of the Yellow-eyed Penguin – Time magazine dubbed him 'The Dr Kinsey of the penguin world' – and the sooty shearwater, or muttonbird. Richdale grew up in Wanganui, took a tertiary course in agriculture in New South Wales, and returned to New Zealand to teach mainly in rural schools in the North Island for several years, eventually taking up a position with the Otago Education Board in 1928 as an inspiring itinerant agricultural instructor and nature study teacher.

Richdale never gave up his day job and incredibly in the weekends, holidays and evenings undertook major, meticulous and time-consuming research on penguins, albatrosses and several petrel species. His study of the muttonbird was achieved during prolonged solo camps on tiny Whero Island in stormy Foveaux Strait, where the wind blew straight from Antarctica.

Neville Peat's biography searches the traces left by this shy and obsessed man for some answers to two questions: why? and what drove him? Richdale's legacy is a nature tourism industry in Dunedin worth $100 million a year, and the longest-running seabird population study in the world.

NEVILLE PEAT is the author or co-author of more than 30 books that explore themes of geography, natural history, environment and biography. He has been a finalist in the Montana New Zealand Book Awards three times and once in the New Zealand Post Children Book Awards. His most recent biography of Sir Tim Wallis was a bestseller.