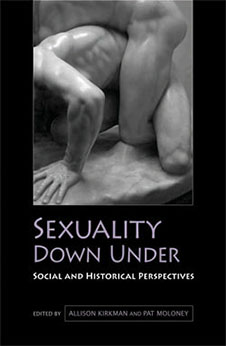 The study of sexuality is both important and controversial. It permeates most aspects of everyday life and is both a hot topic and a taboo subject at the same time.

The 'Virgin in a condom' art work, which attracted protests wherever it was exhibited, features in the book's final essay, and many more aspects of sexualtity are also covered: teenage motherhood, sexuality in advertising, sexuality and Pacific peoples, homosexual law reform, the difference between sex and rape, prostitution, the impact of viagra, and lesbian doctors.

In many of the essays, people have spoken frankly about their sexual preferences and beliefs, something many still find hard to do even in the more liberal society of today. As a result, readers are given a fascinating insight into many of the issues surrounding sexuality in people's lives.

ALLISON KIRKMAN is a senior lecturer in Sociology at Victoria University of Wellington, as well as Associate Dean (Students) in the Faculty of Humanities and Social Sciences. Research interests include gender, sexuality and health. She is the co-author, with Kevin Dew, of Sociology of Health in New Zealand.

PAT MOLONEY is a senior lecturer in Political Science at Victoria University of Wellington. He is a former editor of the journal Political Science and co-editor, with Kerry Taylor, of On the Left: Essays on the History of Socialism in New Zealand (Otago University Press, 2002). His interests include political ideologies, the history of sexuality and theories of colonisation.