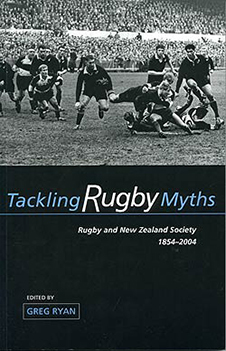 The All Blacks' 'failure' to win the 2003 Rugby World Cup led many devotees to question old certainties and the current direction of the 'national game' in the age of professionalism. Central to these debates has been a sense that the continuity and invincibility of New Zealand rugby has been somehow eroded, mirroring similar changes within society as a whole.

This book examines many aspects of rugby in New Zealand since about 1854, showing how rugby and identity have been bundled together for over a century, with both nation and game endowed with qualities of egalitarianism, innovation and rural pragmatism that have been promoted on the world stage. It tackles some of the very real myths surrounding this image of the game, disentangling assumptions from historical fact and coming up with some interesting angles on rugby's past.

GREG RYAN lectures in history at Lincoln University and is the author of The Making of New Zealand Cricket 1832–1914 (Routledge 2004).