The Duel on the Creek

and other tales of Victorian New Zealand 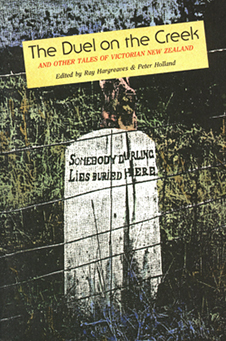 'Miss Cornelia was religious. To her, mirth was an offence, and laughter a sacrilegious thing. Also she believed in the divine use of the rod. And the Villiers girls prayed for an earthquake, even if only a little one; they petitioned Providence to erupt the nearest volcano. But the gods were on a journey, or asleep, of something.'

'It was the dullest Christmas we had ever known on the Creek, which is saying a good deal, for at the best of times the Creek was not a lively spot.'

'White and I went down to the Commercial Hotel, where Big Ben was staying. The house was open, and the landlord was sweeping out the bar. 'Well, boys,' he said, 'how are you after last night's spree?'

New Zealanders enjoy a good yarn – and here are some of the liveliest tales told in magazines and newspapers of the 1880s and 1890s. In turn salty, ironic, mildly naughty, exotic and realistic, they are as engaging today as they were to readers a century ago.