The People and History of Haast and Jackson Bay 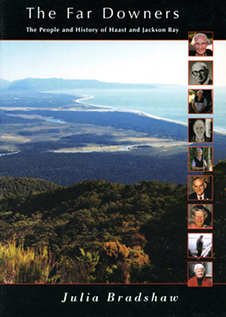 At the end of the road on the southwest coast of the South Island, Jackson Bay is today a fishing village. In 1874, it was established as a special settlement for European immigrants, some of whom refused to disembark from their ships, such were the harsh and isolated conditions of life they saw before them. Those who remained were a feisty lot, living a pioneering life while elsewhere in New Zealand people went to the movies, listened to the radio and drove cars. No road link to the area existed until 1960. This book introduces the reader to the Maori and European history of the Haast district, and shares the life stories of nine people who grew up there in the first half of the twentieth century.

JULIA BRADSHAW is a researcher and writer formerly based in Arrowtown, where she worked as a researcher and exhibitions person at the Lakes District Museum. She is now curator at the West Coast Historical Museum, Hokitika. She has written books and articles and undertaken oral history projects, mostly about the history and people of the Lakes District and South Westland. She is also the author of Arrowtown: History and Walks (Otago University Press, 2001).