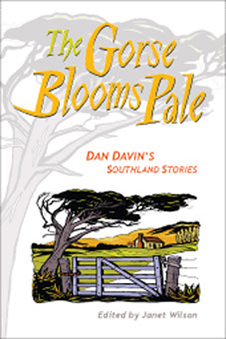 Dan Davin, Rhodes scholar, for many years Academic Publisher at the Clarendon Press in Oxford, and one of New Zealand’s acknowledged masters of the short story, was born in Invercargill in 1913. The Gorse Blooms Pale gathers together twenty-six stories and a selection of poems reflecting his experiences while growing up in an Irish–New Zealand family in Southland.

Comic, haunting, poetic, profound and lyrical, the stories have a regional flavour quite unlike any other body of work in New Zealand literature. They insightfully capture the character of a close-knit rural community, its post-British social relationships and tribulations, with a flair equal to such other New Zealand writers as Sargeson, Frame, Middleton or Marshall. The Gorse Blooms Pale is a rare treasure in the landscape of twentieth-century New Zealand literature.

DAN DAVIN was a New Zealand Rhodes Scholar who became Academic Publisher at the Clarendon Press in Oxford. Throughout his career, in his spare time, he wrote both fiction and works of memoir, from his war novel For the Rest of Their Lives (1947) and Southland novels Roads from Home (1949) and No Remittance (1959) to his collection of war stories The Salamander and the Fire (1986).

JANET WILSON is Professor of English and Postcolonial Studies at the University of Northhampton, UK and editor of the Journal for Postcolonial Writing. She has contributed to the Oxford Companion to New Zealand Literature and edited Intimate Stranger – Reminiscences of Dan Davin.

'This fine edition of the stories that are perhaps Davin's best offers contemporary readers a chance to experience them as a completed set ... The 'attractive illustrated hardback format ... is appropriate for a definitive edition.' Otago Daily Times, Feb 2008

'The book includes 12 stories from that volume, eight from Breathing Spaces (1975) and six previously uncollected stories ... I hadn’t read them before, and I’m grateful to Wilson for re-presenting Davin’s yarns about a culture that seeded people like me." – NZ Listener, January 12–18 2008, Vol 212, No 3531

'These 26 stories are so brilliantly crafted that those to whom his wiriting is new are in for a rare treat, while those familiar with his work can look forward to a renewal of initial pleasure.' – Wairarapa Times-Age, Dec 2007