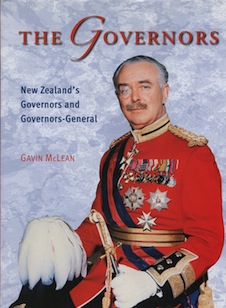 Grey, Jervois, Fergusson, Bledisloe – their names adorn buildings, streets, entire towns, even hills and rivers. But little has been written about the occupants of Government House. The Governors tracks the evolution of an office that says much about New Zealand's constitutional journey. In Crown colony days, governors ruled personally; with responsible government came uneasy adjustment and, from the late 1880s, a new breed of aristocratic governors who presided ceremonially. Since 1972, all governors-general have been New Zealand residents, two have been female and more recently the office has acquired a new international dimension.

With the job came ceremonial and community roles, which governors performed according to their differing personalities. You will meet the governor who complained about being 'highly paid, well housed and well fed, for performing the functions of a stamp' and another, all monocle, medals and plumed helmet, who spoke Māori.

GAVIN McLEAN, Senior Historian at the History Group of the Ministry for Culture and Heritage, has published widely on New Zealand history and in 2005 co-edited the bestseller Frontier of Dreams.

'a grand work ... one of the most satisfying books released in New Zealand last year ... a comprehensive and quite fascinating biographical record. The Governors is a very fine achievement.' – NZ Books September 2007

'this is a very easy-going and entertaining read that will be of interest and relevance to a wider audience than the subject matter might at first suggest ... there is plenty here to stimulate an affectionate reappraisal of this peculiar old institution.' – Wairarapa Times