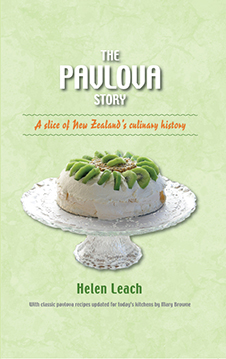 While Australians and New Zealanders have long debated which country invented the pavlova (a large meringue dessert cake said to emulate the lightness of the famous ballerina, Anna Pavlova), the real story of the ballerina’s visit to the Antipodes and the emergence of three different pavlovas was neglected.

The contributions of a gelatine manufacturer, a Dunedin spinster, and numerous other New Zealand housewives are all revealed in this fascinating contribution to food history. The book shows the evolution of the three pavlova types, that their recipes have never been set in stone, and that creative and innovative cooks have played the most important roles in transforming a fashionable afternoon tea cake into an iconic dessert.

'The Pavlova Story will set your sweet tooth singing. From gelatin to meringue, little to large, uncooked to microwaved, Leach explores pavlovas of all shapes, sizes and ingredients ... Leach's thorough research is relayed in a relaxed, readable style and is nicely complemented by a range of colour illustrations. Even more delightful is the inclusion of classic pavlova recipes – converted to metric, remade and photographed by food-writer Mary Browne.' – New Zealand Memories, Issue 80 October/November 2009

'The Pavlova Story is superbly written, informed and informative, making it highly recommended reading for anyone with an interest in distinctive regional and cultural culinary traditions in general, and the pavlova tea cake in particular.' – Wisconsin Bookwatch, November 2009 (Midwest Book Review)

'The carefully placed illustrations, old advertisements, and book covers from Leach’s collection enliven her book and make it fun. Written in a style that is somewhat chatty, it will appeal to both interested cooks and more serious students of culinary history with its well researched and documented details.' – Gastronomica, Summer 2009