The Politics and Government
of New Zealand 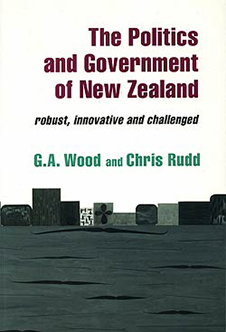 New Zealand's government and politics are experiencing rapid change as core social values are overturned and new institutions and processes developed to cope with stresses and strains in the political system.

The Politics and Government of New Zealand: Robust, Innovative and Challenged is an up-to-date and comprehensive overview of the New Zealand political system. This book is a useful source for understanding current political controversies, such as the role of the Treaty of Waitangi, republicanism and coalition politics.

While the last years of the twentieth century and first years of the twenty-first have seen a period of change, the authors relate these changes in an historical context, recognising the continuities as well as the developments. New Zealand has evolved into a highly complex multi-cultural society of the Asia-Pacific region and its political framework, inherited from Britain, has endeavoured to keep pace with the needs of its citizens, with many interesting and unique features as a result.

With constitutional issues constantly being debated, The Politics and Government of New Zealand is a topical and accessible reference tool for anyone with a question about the political operations of the country, students, and anyone working in the public sector.

G.A. WOOD is a former associate professor of political studies, University of Otago. His publications include Studying New Zealand History: A Guide to Sources (Otago University Press, 1999), Ministers and Members in the New Zealand Parliament (Otago), Governing New Zealand, and State and Sovereignty: Is the State in Retreat with Louis Lelend Jr.

CHRIS RUDD is a senior lecturer in political studies, University of Otago.