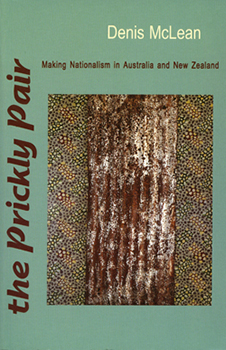 The Iraq war found Australia and New Zealand in deep disagreement. It was not the first such serious strategic difference and is unlikely to be the last. Despite having so much in common and intertwined interests, the two are often at odds. In this highly readable book, Denis McLean draws the stories of the two countries together. Rifts in the ANZAC relationship, the political and economic disconnects, even the sporting rivalry, are explained in the light of nationalism. He suggests that a more concerted, shared approach is needed. Might New Zealand merge with Australia? Or are there other ways to work together in a globalising world?

DENIS McLEAN, a graduate of Victoria and Oxford Universities, has much experience of dealings between the two countries he calls 'The Prickly Pair'. He was a member of the New Zealand foreign service for over twenty years, Secretary of Defence in Wellington for nine years and New Zealand Ambassador to the United States, 1991–94.