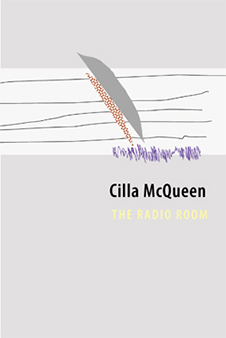 In The Radio Room, Poet Laureate Cilla McQueen travels space and time, throwing 'thought-lines' from her present-day corner of the world to the ancient Celtic islands of her ancestors ('On a cliff-top above screeching gulls I stand still thinking backwards, antipodean poet grafted from ancient taproot in this bedrock' ... 'if they spoke, what would they say? Could I understand that language at the root of my tongue?')

Her point of view is at once small, interior and intimate ('I sit on an upturned apple box in the shade of my hat looking up through the pores of its straw') and in the next breath, flung outwards and upwards: 'Discovered in lenses, bent around stars. I leap island to island, altar to altar'.

The collection is about the writing and reading of poetry, too: 'Poem in hand, the tendons slide and muscles smile under the skin'. 'Soapy Water' riffs on modern politics to play with this theme: 'world poetry is running low. Naturally, there is speculation in solar poetry, wind poetry, tidal poetry, all as old as mankind, since he learned to talk to himself'.

Whether investigating the extinction of the natural landscape or space-time, molecules and mathematics, writing to her dear departed, watching an insect ('I am too big to be seen, like the weather'), or playfully pondering the perspective of a sock, McQueen's word-ware is as polished and intelligent as ever, and demands multiple readings to uncover each subtle layer. 'Poetry takes you apart, puts you back different' she intimates in 'Foveaux Express'. The Radio Room does just that. These are words to be visited again and again, by one of this country's most talented writers.

CILLA McQUEEN is a major New Zealand poet. In 2009 she was named New Zealand Poet Laureate. Fire-Penny, published by Otago University Press in 2005, was her tenth collection of poetry. A Wind Harp features McQueen reading a selection of her poems – an unforgettable cd. Her most recent publications are the handprinted letterpress limited edition An Island (Mirrorcity Press, 2014), and Edwin's Egg and other poetic novellas (Otago University Press, 2014). McQueen has been awarded the NZ Book Award for Poetry three times and held numerous fellowships including the QEII Arts Council's Scholarship in Letters, the University of Otago's Burns Fellowship, a Fulbright Visiting Writers' Fellowship to Stanford University and a Goethe Institut Scholarship to Berlin. She was awarded an honorary doctorate in literature by the University of Otago in 2009. In 2010 she received a Prime Minister's Award for Literary Achievement (Poetry). She lives in Bluff.

‘Somehow McQueen has managed to capture the entire world and fold it between covers.’ – NZ Listener, 19 February 2011

‘McQueen allows words to slipstream rhythmically off her tongue onto the page – delicious.’ – D Scene, 19 January 2011

‘Cilla McQueen, like John Newton, has large issues to ponder, and they’re addressed as much by the studiedly casual, allusive form of her book as by the individual poems and sketches it contains.’ – Landfall 221, Autumn 2011