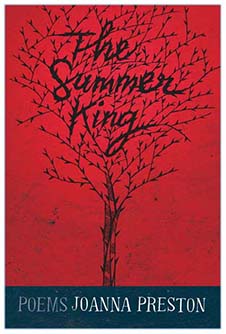 The Summer King tells stories, exploring the world we inhabit and our relationships with the other. Myth, catastrophe, family, strangers, sex, sport – all feature in this ‘fine and fierce first collection’ (Gillian Clark). The book contains two sequences: ‘Cowarral’, about Preston’s family farm in the Forbes Valley of NSW, and ‘Venery’, which was inspired by the collective nouns that first appeared in the Book of St Albans.

‘Joanna Preston writes a poised and sensual poetry, with unsettling energies always threatening to break through the surface.’ (Philip Gross)

From the judge's report: 'Joanna Preston’s title poem, the first in the book, jolts the reader with its imaginativeness and dramatic power, and these qualities are apparent in all the poems that follow. A strong grasp of the actual underlies imaginative representations of both the natural world and the humanly made, generating a dramatic intensity, even in the quieter poems. This is a book of succinct, taut writing that displays a depth of imaginative thought.'

Kathleen Grattan, a journalist and former editor of the New Zealand Woman’s Weekly, died in 1990. Her daughter Jocelyn generously left Landfall (published by Otago University Press) a bequest with which to establish this award in her memory. The judge of the inaugural award was Fleur Adcock. More information

JOANNA PRESTON was born in Sydney and spent her childhood in outback New South Wales. In 1994, she migrated to Christchurch, and has since been active in the Canterbury literary scene. From 2003 to 2006, she lived in the United Kingdom, adding an MPhil. in Creative Writing from the University of Glamorgan to her BA in Theatre and Film Studies. Her award-winning poems have been widely published in New Zealand and internationally, including in the prestigious 2007 Carcanet anthology New Poetries IV and Best Australian Poems 2005. In 2008, Preston was the inaugural winner of The Kathleen Grattan Award for Poetry.

'... as with the craft taken over the book's presentation, it's often the small poetic details which make this collection such a stunning read ... On the strength of The Summer King, Joanna Preston is a name we'll surely be hearing a lot more of in the future.' – Siobhan Harvey, Takehe 69, May 2010

'Preston takes risks. She mixes it up and follows her nose on what she produces ... The Summer King is a great new work.' – Hamesh Wyatt, Otago Daily Times, 24 October 2009

'Preston is unusual on the contemporary NZ poetry scene in writing narrative poetry but her work is also distinguished by strength of structure; her command over the poetic form, including line endings, metre, and the rhythm and flow of the poetry; the emotional power of her work, and its range, from raw to delicate; also her mastery of the subtle nuance as well as not shying away from more in-your-face imagery … The Summer King is a landmark collection that may well prove to be seminal in staking out a fresh approach to NZ poetry in the 21st century.’ – Beatties Book Blog, June 2009