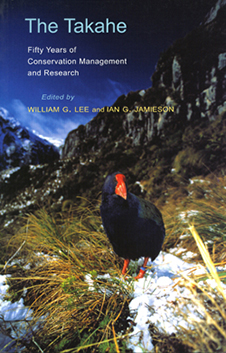 Polynesian settlement of the islands of New Zealand about 1000 years ago and large-scale European colonisation in the 19th century caused massive environmental changes for indigenous animals. Fifty-five species of endemic birds, or 41 per cent of land and freshwater species, were lost. In response to these extinctions and the marked population decline of many extant species, national government agencies supported conservation initiatives throughout the 20th century.

For more than fifty years attempts to conserve the takahe (Porphyrio hochstetteri), a large, flightless, herbivorous bird, have pioneered techniques for managing protected natural areas, habitat manipulation, captive rearing, wild releases and island translocations. The story of the takahe since its rediscovery by Geoffrey Orbell has been an integral part of the progress of conservation science and management in New Zealand. This book reflects that story.

Edited by WILLIAM G. LEE and IAN G. JAMIESON, with a foreword by Professor John Fitzpatrick, President of the American Ornithologists' Union