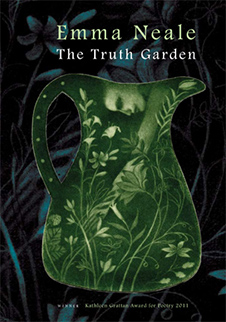 Winner of the Kathleen Grattan Award for Poetry 2011

'The breath held or expelled in wonder, frustration or delight energises Emma Neale's writing. Poems in The Truth Garden take risks because they need to; in the clamour of family life they have required attention, collected thought and a spirited attitude. How else to "stockpile time, how hoard its shine", except in poems drawn from relationships, home and garden and cast in words that "spill like incandescence around your hands".' – Cilla McQueen, 2011 Kathleen Grattan Award judge

This is the fourth book in the series arising from the Kathleen Grattan Award for Poetry. Each book is produced with attention to the traditional qualities of fine book production, in typography, illustration, design, paper and binding. The Truth Garden is illustrated by Kathryn Madill and designed by Fiona Moffat.

EMMA NEALE has published five novels and three collections of poetry. She has also edited three anthologies: Creative Juices (HarperCollins, 2001), Best New Zealand Poems 2004 and Swings and Roundabouts: Poems on Parenthood (Godwit, 2007). Her poetry has appeared in UK, Australian and New Zealand periodicals, and extracts of her work have appeared in North American literary publications such as Bat City Review, the Harvard Review, and the website Poetry Daily. A past recipient of the Creative New Zealand/Todd New Writers' Bursary, she was awarded the inaugural NZSA/Janet Frame Memorial Award for Literature, and was the 2012 Robert Burns Fellow at the University of Otago. Her most recent novel, Fosterling, is shortlisted for the Sir Julius Vogel Award for Science Fiction and Fantasy. Her most recent publication is Tender Machines (Otago University Press, 2015).