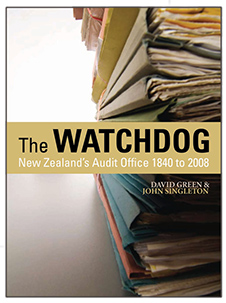 In a global economic climate troubled by the consequences of a dearth of fiscal accountability and transparency, the importance of independent auditing bodies, whether in the public or private sector, is not to be underestimated.

Today New Zealand is perceived as one of the world’s least corrupt nations – ranking alongside Denmark and Finland – indicating a job well done by its national Audit Office in inspiring public confidence. Yet the government auditing function set up in 1840 was initially a ‘timid creature’. The authors trace the office’s rise and decline towards ‘impotent irrelevance’ before it was saved by computers, which facilitated more targeted and searching methods of examination. This absorbing tale moves from the teething problems of difficult origins, in which ‘the fulminations of Auditors-General were increasingly dismissed as nit-picking and legislated around – or ignored’, to the brave new world of radical ‘value for money’ auditing in the 1970s. The public sector reforms of the 1980s saw questioning of the very need for an Audit Office – questions that the Office was by then well equipped to answer.

Published with the assistance of the Ministry for Culture and Heritage

DAVID GREEN is an historian and editor in the History Group, Ministry for Culture and Heritage, Wellington. His research interests are the New Zealand state, military history and sport. Co-author of The Gunners: A History of New Zealand Artillery, he is working on a guide to the battlefields of the New Zealand Wars.

JOHN SINGLETON is Reader in Economic History at the School of Economics & Finance, Victoria University of Wellington. He is the principal author of Innovation and Independence: The Reserve Bank of New Zealand 1973–2002, and has written extensively on the economic and business history of the UK, New Zealand and the Commonwealth.