The Welcome of Strangers

An ethnohistory of southern Maori 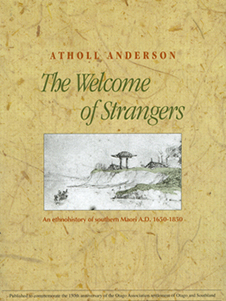 Two hundred years ago Maori in the south of New Zealand had a lifestyle quite distinct from that of their northern cousins, and different experiences of contact with Europeans. This book provides an insight into those times. While it ranges from Marlborough to Stewart Island, its emphasis is on the far south.

Drawing on tribal knowledge as well as early written accounts, the author surveys the origins and migrations of the Waitaha and Kati Mamoe peoples and the subsequent arrival and establishment of Ngai Tahu. A vivid picture of southern lifeways is painted, showing how communities were run and how they lived off land and sea using the system of ‘mahinga kai’ in organising food resources. The impact of European arrivals in the form of whalers and sealers and later missionaries is described, as well as Maori responses to their increasing presence.

Professor ATHOLL ANDERSON, FRSNZ, is of Kai Tahu descent. He was head of anthropology at Otago before spending the last 17 years of his academic career at Australian National University, in Canberra. He is the editor of James Herries Beattie's Traditional Lifeways of the Southern Maori (Otago University Press, 2009). His most recent publication, co-authored with the late Dame Judith Binney and Dr Aroha Harris, is Tangata Whenua: An Illustrated History (2014).

You can read an interview with Professor Anderson here.