The Writer at Work 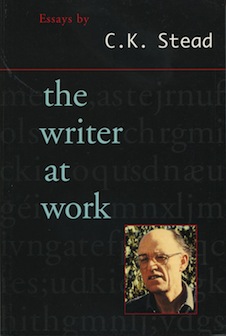 Into this volume C.K. Stead gathers a selection of his essays from the past decade, mixing literary criticism with autobiography. He reviews the work of other writers, meditates on the teaching of literature, revisits some controversies and explores literary history. Always interesting, the essays travel through time and space – from Janet Frame, to Barry Humphries' birthday, to Paul Theroux and telling the truth, to Shelley's Constantia – on a brilliant carpet of scholarship and wit.

C.K. STEAD has published eight novels, two collections of short stories, twelve collections of poetry, and four of literary criticism. He has edited a number of anthologies and has been a regular reviewer for the London Review of Books, in which many of these essays first appeared. He has received a number of literary awards, the CBE in 1984 for services to New Zealand literature, and was elected a Fellow of the Royal Society of Literature in 1995. He was professor of English at Auckland University for twenty years before leaving in 1986 to write full-time. His best-known work of literary criticism is The New Poetic, which sold over 100,000 copies in Britain and the US.

'This is Stead at his best, both compelling and entertaining' – Jan Cronin, Evening Post