Traditional Lifeways
of the Southern Maori 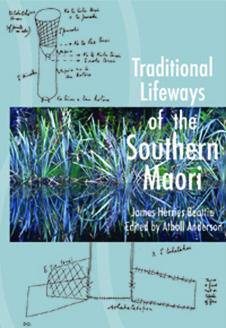 Journalist Herries Beattie recorded southern Maori history for almost fifty years and produced many popular books and pamphlets. This is his single most important work, based on a major field project for the Otago Museum in 1920 and published here for the first time.

Beattie had a strong sense that traditional knowledge needed to be recorded fast. For twelve months, he interviewed people from Foveaux Strait to North Canterbury, and from Nelson and Westland. He also visited libraries to check information compiled by earlier researchers, spent time with Māori in Otago Museum recording southern names for fauna and artefacts, visited pa sites, and copied notebooks lent to him by informants. Finally he worked his findings up into the systematic notes, which eventually became manuscript 181 in the Hocken Collections, and now this book.

Editor Atholl Anderson introduces the book with a biography of Beattie, a description of his work and information about his informants. Beattie wrote a foreword and introduction to the Murihiku section, which are also included here.

Professor ATHOLL ANDERSON, FRSNZ, is of Kai Tahu descent. He was head of anthropology at Otago before spending the last 17 years of his academic career at Australian National University, in Canberra. His works include The Welcome of Strangers: An ethnohistory of southern Maori (Otago University Press, 1998). His most recent publication, co-authored with the late Dame Judith Binney and Dr Aroha Harris, is Tangata Whenua: An Illustrated History (2014).

You can read an interview with Professor Anderson here.