Memoirs of a Whaling Ship’s Doctor, 1866
by Dr Louis Thiercelin

Transcribed and edited by Christiane Mortelier 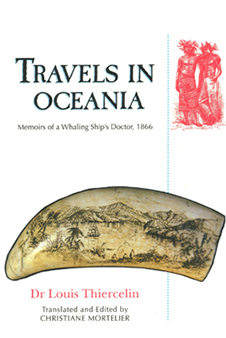 First published in Paris as Journal d’un balenier, this translation focuses on Dr Thiercelin’s travels and does not include chapters on whaling operations. It takes the reader to New Caledonia, the Chatham Islands, the South Island of New Zealand, Tahiti and Hawaii. Thiercelin made two voyages in the Pacific, 20 years apart, on the Ville de Bordeaux 1837–41 and the Gustave 1861–64. He provides a rare point of view – that of a well-informed, educated European who was neither a missionary nor a government official. While his ideas were limited by the ethnocentricity of the time, his commentary on the French and English colonisation of the Pacific is insightful and often critical.

Thiercelin had an unusual perspective on the Pacific because he visited many places twice, with a 20-year gap in between. There are moments of great poignancy in the text, especially when he describes the ‘before’ and ‘after’ of colonisation, none more so than in his description of Akaroa Bay.