An Anthology of Dunedin Poetry 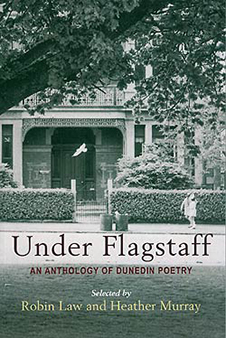 Cradled between bush-covered hills and sea, the city of Dunedin inspires a strong sense of heritage and place – and fabulous poetry.

Under Flagstaff: An Anthology of Dunedin Poetry brings together for the first time a selection from the extraordinarily rich resource of poems, published and unpublished, written about the city and its environs.

These poems convey Dunedin's uniqueness, with its natural qualities featuring strongly (especially the weather). The collection is ordered in a geographic sense with poems spiralling outwards from the heart of the Octagon with its Robbie Burns statue: to pubs, student flats, the university, beaches, hill-tops, the harbour and beyond.

Dunedin has both fostered its own and hosted many of New Zealand's finest writers, including for over fifty years the University of Otago Burns Fellowship. This intimate mapping features works by some of New Zealand's best-loved poets, including James K. Baxter, Ruth Dallas, Janet Frame, Cilla McQueen, J.C. Sturm and Hone Tuwhare, as well as some newer voices.

Soon after she became a lecturer in geography at the University of Otago, ROBIN LAW began collecting poems set in or about the university's hometown. With her friend HEATHER MURRAY, who teaches literature at the university, she produced this volume. Heather is also co-editor with Lawrence Jones of The Mainland.