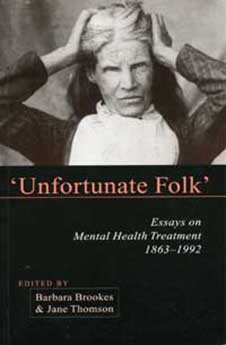 Each contributor has shed light on a specific area, and in the process important information about institutions, patients and caregivers, and methods of treatment is unearthed. The siting of Seacliff Hospital at a distance from Dunedin, for example, was less about keeping patients away from the public, and more about the treatment regimes favoured at the time: fresh air, outdoor exercise and work on the farm. Some personalities, such as Truby King of Plunket fame, are seen employed in another aspect of their life's work.

The first two sections of the book provide a regional focus, charting changes in treatment and care in the Otago region since the founding of the Dunedin Lunatic Asylum 1863. The authors trace the development of individual institutions over the years, and show how a national policy or the lack of it is played out locally. They discuss staffing and medical training, public and private hospitals, and the modern development of community care.

Jane Adams has contributed a chapter on criminal lunacy, which is part of a longer essay that won her the prize for best essay in the Australia and New Zealand Law and History competition. She shows that the danger presented by those judged to be criminally insane was, in fact, negligible.

The final section of 'Unfortunate Folk' looks at some wider New Zealand patterns, with the creation of a specialty within medicine directed specifically towards mental health treatment. One chapter uses an oral history approach to explore why psychiatry practice particularly appeals to women.

The essays in the book have been researched and written by postgraduate students at Otago's history department. They have drawn on a wide range of resources, some made specially available by health authorities. This is the second volume of essays by postgraduate history students published by University of Otago Press; the first was When the Waves Rolled in Upon Us: Essays in nineteenth-century Maori history. Both books make valuable student research available to the wider community, and enable readers to sample a variety of subjects within one volume.

People involved in the mental health sector, historians, students, and anyone interested in the history of New Zealand will find this an absorbing read. The book is illustrated with 20 photographs, many of which have not been previously published.

BARBARA BROOKES is Professor of History at the University of Otago. One of her research interests is the history of medicine and her work in this field has acted as a catalyst for students. She has supervised several of the students whose work appears in this book.

JANE THOMSON, an independent editor, worked with Michael Reilly on another volume of student essays, When the Waves Rolled in Upon Us: Essays in nineteenth-century Maori history, also published by University of Otago Press.