The Archaeology of Pacific Material Culture 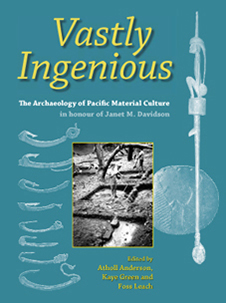 Reflecting in 1769 on the manners and customs of the South Sea islands, Joseph Banks remarked that 'in every expedient for taking fish they are vastly ingenious'. Hence the title of this book on Pacific material culture, past and present, with broad themes of origins, the movement of peoples and the development of their technologies.

Bringing together an impressive group of scholars of Pacific archaeology, the editors have designed the book as both a thoroughly up-to-date and wide-ranging survey and as a festschrift for museum archaeologist Janet Davidson, until recently based at The Museum of New Zealand Te Papa Tongarewa.

ATHOLL ANDERSON is a Pacific prehistorian based at Australian National University in Canberra. He has published many scholarly books and articles on New Zealand and Pacific prehistory and ethnohistory.

KAYE C. GREEN was a Pacific field archaeologist from 1958 to 1975, when she joined the New Zealand Department of Conservation as manager of publishing and science communication. She is now retired and lives near Wellington.

FOSS LEACH is a Pacific prehistorian who was based at Otago University until 1987, when he moved to the Museum of New Zealand. He is now retired and lives in the Marlborough Sounds.