When the Farm Gates Opened

The impact of Rogernomics on rural New Zealand 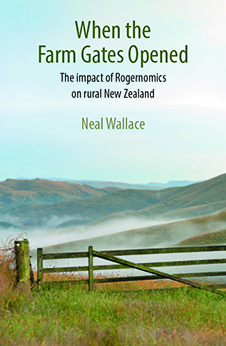 The economic reforms launched by the 1984 David Lange-led Labour government changed New Zealand forever. Agriculture bore the brunt of those changes and Rogernomics, the name by which the era came to be known, became an historical reference point for the primary sector: a defining and pivotal moment when financial subsidies abruptly ended and farming learned to live without government influence, interference or protection.

The changes were more sweeping and wide ranging than anything farmers and farming had expected. Some adjusted, some did not. Farmers downed tools in protest, many were forced from their land, families split, there was a spike in suicides and stories spread of farmers hiding machinery from repossession agents.

Thirty years on, there has been little documentation of what is folklore and what is fact. This gripping and moving social history, by award-winning agricultural journalist Neal Wallace, relates the story of a rural sector battered and bruised by rapid change. It traces the period building up to the economic changes by talking to political and sector leaders, and the most important contribution comes from interviews with those most affected: farmers.

Journalist NEAL WALLACE was raised on an Otago sheep and beef farm. On leaving school he worked as a farmhand in South Otago before embarking in 1983 on a journalism career, initially at the Ensign in Gore and then the Star in Christchurch. In 1987 he moved to Dunedin where he was the southern reporter for the weekly New Zealand Farmer for eight years before returning to daily journalism at the Otago Daily Times, where he has been ever since. Beginning as a general reporter, he has also been a business reporter and for 10 years was the ODT agribusiness editor. Latterly he has been the regional chief reporter. Wallace has won numerous awards, including the Rongo Award for excellence in agricultural journalism (1998) and two Qantas Media Awards (1999). In 2003 he was awarded a David Low Fellowship to attend the Reuters Foundation Programme at Oxford University. He lives in Dunedin and is married to Liz. They have two children, Joshua and Grace.

OUT OF PRINT. EBOOK AVAILABLE