Edwin’s Egg
and other poetic novellas 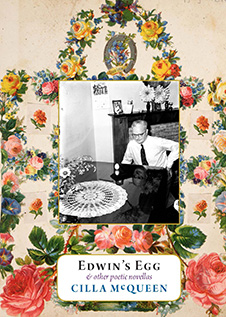 Cilla McQueen was New Zealand Poet Laureate 2009–11. One of her writing projects during her time as laureate was Serial, which she described as ‘exploring a space between prose and poetry’. It was published in chapters on the Poet Laureate website. Retitled Edwin’s Egg and other poetic novellas, this work is now published for the first time in hard-copy format, combining McQueen’s evocative text with wonderful images from the collection of the Alexander Turnbull Library.

Published in association with the Alexander Turnbull Library.

CILLA McQUEEN has published more than 10 collections of poetry. Recent publications include The Radio Room (Otago University Press, 2010) and the handprinted letterpress limited edition An Island (Mirrorcity Press, 2014). She has been awarded the NZ Book Award for Poetry three times and held numerous fellowships including the QEII Arts Council's Scholarship in Letters, the University of Otago's Burns Fellowship, a Fulbright Visiting Writers' Fellowship to Stanford University and a Goethe Institut Scholarship to Berlin. She was awarded an honorary doctorate in literature by the University of Otago in 2009. In 2010 she received a Prime Minister's Awards for Literary Achievement (Poetry). She lives in Bluff.