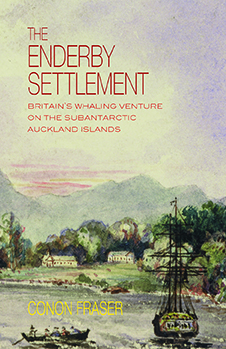 This book is a history of the British Enderby settlement on the Auckland Islands 1849–52 and its associated whaling venture. Isolation, a stormswept climate, unproductive soil, inexperienced crews, drunkenness and above all an unexpected shortage of whales meant the raw colony ran into trouble and the parent company found itself facing disaster.

Two special commissioners were sent to either close the venture down or move it else­ where, and a bitter struggle developed, with Charles Enderby refusing to admit defeat and Governor Sir George Grey reluctantly becoming involved.

Nevertheless the settlement collapsed, and the few Maori settlers on the islands, who had preceded and benefited from the colonists’ presence, left soon after. Little trace of the colony remains, and the Auckland Islands are much as they were before Charles Enderby attempted to realise his dream: uninhabited, isolated, wild and beautiful, and now of World Heritage status.

Historian CONON FRASER’s earlier books include Beyond the Roaring Forties: New Zealand’s Subantarctic Islands (1986) and the edited volume Enderby Settlement Diaries (1999). He was also a much­ published freelance journalist and short­ story writer, and a director/producer/ writer of numerous television and film documentaries including the award­-winning Coal Valley, Children of the Mist, The Kauri and Beyond the Roaring Forties. Conon passed away as this book was going to press.