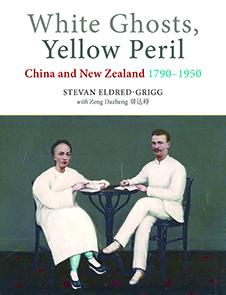 White Ghosts, Yellow Peril is the first book ever to explore all sides of the relationship between China and New Zealand, and the peoples of China and New Zealand, during the whole of the seven or so generations after they initially came into contact. The Qing Empire and its successor states from 1790 to 1950 were vast, complex and torn by conflict. New Zealand, meanwhile, grew into a small, prosperous, orderly province of Europe. Not until now has anyone told the story of the links and tensions between the two countries during those years so broadly and so thoroughly.

The reader keen to know about this relationship will find in this book a highly readable portrait of the lives, thoughts and feelings of Chinese who came to New Zealand and New Zealanders who went to China, along with a scholarly but stimulating discussion of race relations, government, diplomacy, war, literature and the arts.

White Ghosts, Yellow Peril for some years to come will be the key general text in the field of the early history of New Zealand and China.

STEVAN ELDRED-GRIGG grew up in Canterbury, New Zealand, and has lived and worked in China, mostly in Shanghai and Beijing. He holds a doctorate in history from the Australian National University and is the award-winning author of seven other history books along with nine novels, including Oracles and Miracles (Penguin, 1987). His most recent history is The Great Wrong War; his most recent novel is Bangs. Few contemporary New Zealand or Australian writers have written about subjects so varied and challenging, and in such a variety of genres and styles.

ZENG DAZHENG (曾达峥) was raised in Xiamen, China, and now lives in Wellington, New Zealand. He has studied and tutored in New Zealand politics and economics, worked as a parliamentary officer in Wellington and subsequently as a policy analyst for the Ministry of Economic Development. At present he is completing a doctoral thesis at Victoria University of Wellington; the topic is ‘Youth and social control in New Zealand political history’.