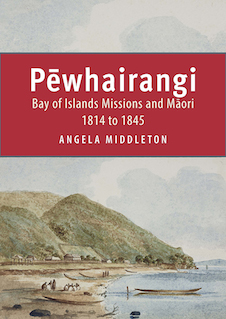 When a small group of three English families were landed in the bay below Rangihoua pā in 1814, under the protection of its chief and inhabitants, the story told in Pēwhairangi began. It is the story of New Zealand’s first permanent European settlement, at Hohi, and the church mission that it represented, and of the other mission communities subsequently established in the Bay of Islands, at Kerikeri, Paihia, Te Puna and Waimate. It is a story of Ngāpuhi and Pākehā engagement, as neighbours, over four decades.

More than anything else, the rich fabric of this book is a story of people: of the chiefs Te Pahi, Ruatara, Hongi Hika, Tāreha, Korokoro, of the missionaries John King, Thomas Kendall, James Kemp, John Butler, George Clarke, William Yate and Henry Williams, of the mastermind Samuel Marsden, and of the wives and children of all these men: Hongi’s wife Turikatuku and daughter Hariata, Hannah King and Hannah Butler, Hone Heke and George Clarke junior, Marianne Williams and Charlotte Kemp. And recording the multiple comings and goings in the Bay were the artists, amateur and professional, whose works supply many of the book’s fine illustrations.

ANGELA MIDDLETON is a consultant archaeologist and honorary research fellow in the Department of Anthropology and Archaeology at the University of Otago. Pēwhairangi draws on the author’s ongoing examination of the archaeology of missionisation in New Zealand as well as its international comparative context. She has published Two Hundred Years on Codfish Island (Whenua Hou, 2007), Te Puna: A New Zealand mission station (2008) and Kerikeri Mission and Kororipo Pā: An entwined history (2013).

OUT OF PRINT. EBOOK AVAILABLE