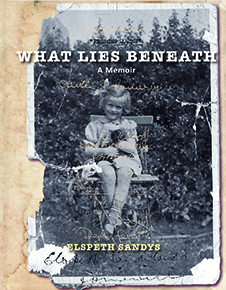 Writer Elspeth Sandys was born during the Second World War, the result of a brief encounter between two people who would never meet again. The first nine months of her life were spent in the Truby King Karitane Hospital in Dunedin, where she was known by her birth name, Frances Hilton James. This would change with her adoption into the Somerville family. A new birth certificate was issued and Frances James became Elspeth Sandilands Somerville.

Tom and Alice Somerville, Elspeth’s new parents, lived with their son John in Dunedin’s Andersons Bay. While Elspeth was happy among the ebullient and welcoming Somerville clan, she had a difficult relationship with her adoptive mother, who was frequently hospitalised with mental health problems. Elspeth’s search for her birth parents did not begin until much later in her adult life. What she discovered after an exhaustive search provided answers that were both disturbing and, ultimately, rewarding. What Lies Beneath is a searing, amusing, and never less than gripping tale of a difficult life, beautifully told.

ELSPETH SANDYS has published eight novels and two collections of short stories, and has written extensively for the BBC and Radio New Zealand. Her novel River Lines was a finalist in the Orange Prize (UK), and her short story collection Standing in Line won the Elena Garro PEN International Prize in 2003. The stage play Masquerade (now known as Vagabonds) was selected for the London International Playwriting Festival in 2005 and was shortlisted in the Columbus State Theatre competition in 2006. Elspeth has received many awards and fellowships in recognition of her work and in 2006 was made an Officer of the New Zealand Order of Merit for services to literature.

Also available as an audio book from Audible and other providers.