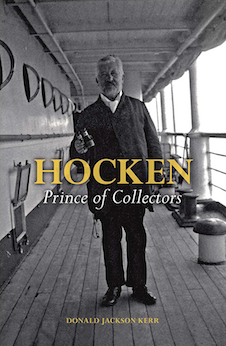 Dr Thomas Morland Hocken (1836–1910) arrived in Dunedin in 1862, aged 26. Throughout his busy life as a medical practitioner he amassed books, manuscripts, sketches, maps and photographs of early New Zealand. Much of his initial collecting focused on the early discovery narratives of James Cook; along with the writings of Rev. Samuel Marsden and his contemporaries; Edward Gibbon Wakefield and the New Zealand Company; and Māori, especially in the south. He gifted his collection to the University of Otago in 1910.

Hocken was a contemporary of New Zealand’s other two notable early book collectors, Sir George Grey and Alexander Turnbull. In this magnificent piece of research, a companion volume to his Amassing Treasures for All Times: Sir George Grey, colonial bookman and collector (2006), Donald Kerr examines Hocken’s collecting activities and his vital contribution to preserving the history of New Zealand’s early post-contact period.

DONALD KERR is Special Collections Librarian and co-Director of the University of Otago Centre for the Book. He is passionate about books and enjoys long-term projects in book history, especially the history of collecting and the formation of private libraries. He is the editor of Enduring Legacy: Charles Brasch, Patron, Poet & Collector (Otago University Press, 2003) and has also written on the history of duelling: The Smell of Powder: A history of duelling in New Zealand (Random House, 2006). He has studied the collecting of Sir George Grey, Henry Shaw, Frank W. Reed and Esmond de Beer, and is currently working on a book about 12 prominent New Zealand book collectors.