From Alba to Aotearoa 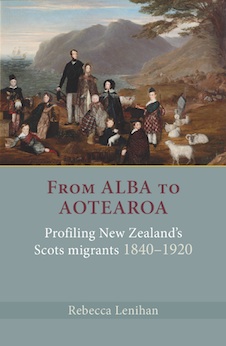 Scots made up nearly 20 per cent of the immigrant population of New Zealand to 1920, yet until the past few years the exact origins of New Zealand’s Scots migrants have remained blurred.

From Alba to Aotearoa establishes for the first time key characteristics of the Scottish migrants arriving between 1840 and 1920, addressing five core questions: From where in Scotland did they come? Who came? When? In what numbers? and Where did they settle?

In addition, this important study addresses, through statistical analysis, issues of internal migration within Scotland, individual and generational occupational mobility, migration among Shetland migrants, and return migration.
From Alba to Aotearoa offers context to the increasing body of studies of the social and cultural history of New Zealand’s Scots, their networks, cultural transfers and identity.

REBECCA LENIHAN completed her undergraduate degree and her PhD at Victoria University of Wellington. Her doctoral thesis, creating a demographic profile of New Zealand’s Scots migrants, was part of a larger research project investigating the Scots in New Zealand funded by the Royal Society Marsden Fund of New Zealand. Between 2011 and 2013 Rebecca worked as a post-doctoral fellow at the University of Guelph, Canada, and she is currently (2015–18) a post-doctoral fellow at Victoria University of Wellington. Rebecca is the author of several articles and book chapters, and co-author of Unpacking the Kists (McGill Queen’s University Press/Otago University Press, 2013).