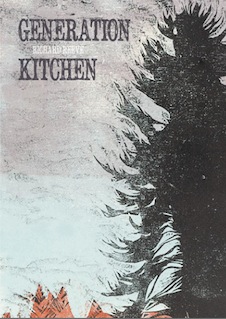 Much sought after by oil companies, ‘generation kitchens’ are sites where geological forces have combined to create conditions for oil production.

By turns brooding and wittily observant, Richard Reeve’s fifth book of poetry meditates on the intrigues of fossil fuel companies and ecological despoliation, but also on personal rites of passage – on relationships, deaths, the turn of the seasons.

Comic monologues, spiritual invocations, flung swearwords, elegies, eulogies, wind tunnel diatribes and fanciful phantasmagorias co-exist in this collection. Oracular and bardic, Reeve’s work is also paradoxically down to earth and gritty. He knows that, beyond the geopolitical framework, beyond the anthropocene moment, the landscape endures, as in the poem ‘Warrington Dives’:

the bright
swell bending around the coast, prodding the dark,
clouds of sediment thrown up by a wave …

RICHARD REEVE was born in Dunedin in 1976. He has published four previous collections of poems: Dialectic of Mud (Auckland University Press, 2001), The Life and the Dark (AUP, 2004), In Continents (AUP, 2008) and The Among (Maungatua Press, 2008). He has been awarded a number of prizes, including the 1998 MacMillan Brown Prize and the 2002/03 Todd Foundation Writer’s Bursary, and has had poems selected for Best New Zealand Poems in 2001, 2004 and 2007. Reeve’s poems have been widely published in literary journals such as London Magazine, Meanjin, Rattapallax, Southerly, Landfall and Glottis. He is a former university tutor and publishing editor, and currently works as a lawyer. He lives in Warrington in North Otago.