A voice for nature conservation 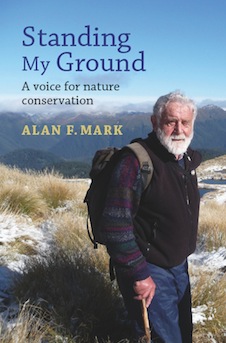 For more than five decades, Alan Mark has been a voice for conservation in New Zealand. From his call in the 1960s for the establishment of tussock-grassland reserves in the South Island high country to his involvement in the 2011–13 campaign to save the Denniston Plateau from mining, he has been a passionate and effective advocate for the preservation of areas of ecological importance.

Alan’s conservation activities have paralleled – and are informed by – a distinguished academic career as a botanist and ecologist. A member of Otago University’s Botany Department from 1955 until his retirement as Professor and Head of Department in 1998, he has run and participated in numerous research projects, taught and mentored thousands of students and published 200 academic papers.

In Standing My Ground, Alan describes the challenges and achievements, the frustrations and successes that have made up his remarkable life, now in its ninth decade. A revered figure in the conservation movement, rewarded for his contribution by a knighthood in 2009, he has also endured his share of criticism and insult, which he has weathered with the support of Otago University and his family.

As well as providing an important record of New Zealand’s conservation battles and documenting the life of an outstanding New Zealander, Standing My Ground is an inspiring reminder of the power of individuals to make a difference.

Plant ecologist ALAN MARK has spent most of his life researching the ecology and sustainable management of indigenous ecosystems. He has served on several official organisations, including Manapouri–Te Anau Lake Guardians, National Parks and Reserves Authority, Conservation Authority, Otago Conservation Board, Land Settlement Board, Mountain Lands Committee and Fiordland Marine Guardians. He is a distinguished life member of the Forest & Bird Protection Society, a life member of the NZ Ecological Society and the Ecological Society of America, an honorary member of the NZ Alpine Club, a Fellow of the Royal Society of NZ and recipient of the society’s Hutton Medal and Fleming Environmental Award. He received a CBE in 1989, a DCNZM in 2001 and was knighted in 2009 for his services to conservation. He received an honorary DSc from the University of Otago in 2014.