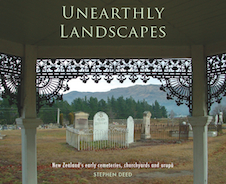 By the nineteenth century the ancient urban churchyards of Britain, burdened with gener­ations of dead, were unable to cope with rising numbers of corpses. Partially decomposed bodies were regularly disinterred and dumped in pits to free up room for the newly dead.

Fears about the danger to public health eventually put an end to the urban churchyard burial grounds, and by the time settlers set sail for New Zealand large ‘modern’ cemeteries were being established on the edges of towns and cities. Migrants therefore brought with them a range of burial practices. The land they arrived in already had a long tradition of Māori burial ritual and places, which would be transformed by this contact with the European world. The migrants’ own traditions were adapted to their new environment and society, creating burial places unique to New Zealand.

Today, old cemeteries dot the countryside, but are often ignored. Yet the resting places of the dead are a reflection of the life of the surrounding community, and New Zealand’s early cemeteries have fascinating stories to tell. In this beautifully written and illustrated book, Stephen Deed sets out to reconnect the historic cemeteries we see today with the history of this country and its people.

STEPHEN DEED is an historian and librarian with an interest in the interpretation and conservation of buildings and landscapes. He has worked closely with Heritage New Zealand Pouhere Taonga and the Historic Cemeteries Conservation Trust of New Zealand to record and protect important and fragile parts of our built environment. Stephen studied at the University of Otago but now lives in London, and although he has come to love its grimy brick terraces, New Zealand’s landscape and old wooden houses are still close to his heart.