The Prison Diary of A.C. Barrington 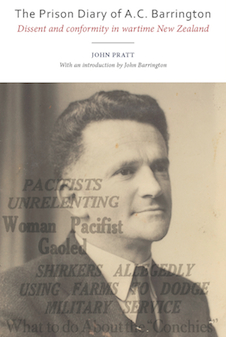 A.C. (Archie) Barrington was a leading New Zealand pacifist during World War 2. Incarcerated in Mount Crawford Prison for his beliefs in 1941, he kept an illicit diary, scrawled in the margins of books. Many years later his son John happened across the diary and painstakingly reconstructed it.

Such documents are exceptionally rare – until recent times prisoners were not allowed to keep any record of their experiences and many were illiterate anyway. Barrington vividly and compellingly recorded the squalid, rundown conditions, monotonous and exhausting labour, the intense cold from which there was little protection, and the strategies he and his fellow pacifists adopted to enable them to cope with prison life.

John Pratt has edited the diary and provides a fascinating commentary on the issues it raises in relation to prison life then and now. He also addresses a fundamental question – what were Barrington and his like doing in prison, when similar expressions of dissent would almost certainly have been ignored in Australia or Britain? Why was New Zealand, with its ‘fair go’, egalitarian reputation, so intolerant and punitive? Pratt chronicles a history of intolerance, suspicion and deep-seated antipathies that may go some way towards explaining the current penal saturation in this ‘friendly’ land.

Professor JOHN PRATT has spent most of his academic career at the Institute of Criminology, Victoria University of Wellington. His research on comparative penology and the history of imprisonment has given him an international reputation, with invitations to lecture on his work at universities in South America, North America, Europe, Asia and Australia. In 2009 he was awarded the prestigious Sir Leon Radzinowicz Prize by the Editorial Board of the British Journal of Criminology, and the following year he took up a one-year fellowship at the Straus Institute for Advanced Studies in Law and Justice, New York University. In 2012 he was elected to a Fellowship of the Royal Society of New Zealand and in 2013 he was awarded the society’s Mason Durie Medal, given ‘to the nation’s pre-emiment social scientist’.