Life and commerce on the goldfields of New Zealand and Australia 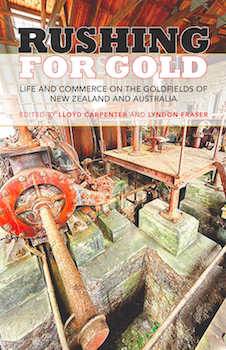 Rushing for Gold is the first book to take a trans-Tasman look at the nineteenth-century phenomenon that was the gold rushes in Australia and New Zealand. It explores links between the rushes, particularly those in Victoria and Otago, to show that they were strongly intertwined affairs.

The book brings together contributions from both experienced and newly emergent researchers, who together provide a close examination of miners’ migration patterns, ethnicities and merchant networks.

The contributors’ insightful analyses and narrative accounts of the places, commerce and heritage of the rushes reveal a pantheon of characters, from merchants, hoteliers, financiers and policemen to vagrants, sly-groggers and entertainers, not to mention women, all of whom prompted and populate the mythology of the era, which this book does much to unravel and rewrite.

A former teacher, insurance manager, sales manager and Salvation Army officer, LLOYD CARPENTER returned to the University of Canterbury in 2008 and emerged with a PhD on a subject he has loved since his youth: the Central Otago gold rush. In 2014 he was appointed to teach Māori Studies at Lincoln University, where he specialises in the history of the Treaty of Waitangi, bicultural engagement and modern Māori culture. In 2016 Lloyd will be a visiting fellow of Cambridge University’s Faculty of History.

LYNDON FRASER is an associate professor of history at the University of Canterbury and a research fellow at the Canterbury Museum. His recent publications include A Distant Shore: Irish migration and New Zealand settlement (OUP, 2000); Castles of Gold: A history of the West Coast Irish (OUP, 2007), which won the J.W. Sherrard Award for New Zealand Regional and Local History; and Far from 'Home': The English in New Zealand (OUP, 2012), co-edited with Angela McCarthy.