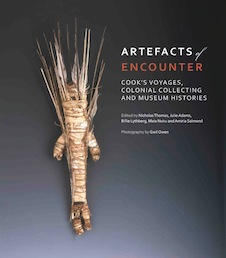 The Pacific artefacts and works of art collected during the three voyages of Captain James Cook and the navigators, traders and missionaries who followed him are of foundational importance for the study of art and culture in Oceania.

These collections are representative not only of technologies or belief systems but of indigenous cultures at the formative stages of their modern histories, and exemplify Islanders’ institutions, cosmologies and social relationships.

Recently, scholars from the Pacific and further afield, working with Pacific artefacts at the Museum of Archaeology and Anthropology in Cambridge (MAA), have set out to challenge and rethink some longstanding assumptions on their significance.

The Cook voyage collection at the MAA is among the four or five most important in the world, containing over 200 of the 2000-odd objects with Cook voyage provenance that are dispersed throughout the world. The collection includes some 100 artefacts dating from Cook’s first voyage.

This stunning book catalogues this collection, and its cutting-edge scholarship sheds new light on the significance of many artefacts of encounter.

NICHOLAS THOMAS is Director of the Museum of Archaeology and Anthropology, University of Cambridge. He has written extensively on art, empire and related themes, and curated exhibitions in Australia, New Zealand and the UK, many in collaboration with contemporary artists. His early book, Entangled Objects (1991), influentially contributed to a revival of material culture studies. He went on to publish, among other works, Oceanic Art (1995) in the Thames and Hudson World of Art series and Islanders: The Pacific in the Age of Empire (2010), which was awarded the Wolfson History Prize.